Overview
Within an easy ride you can reach all the island’s main attractions, including beaches, hiking trails and cycling routes. Palma de Mallorca and the airport are conveniently situated just 30 minutes away. Villa Chalina is decorated with an eclectic mix of works of art from around the world and modern style furniture with a Mediterranean hint. The accommodation is spread over two floors and encompasses five en-suite twin rooms (two single beds) of which one beautiful master bedroom for a maximum capacity of 10 guests. 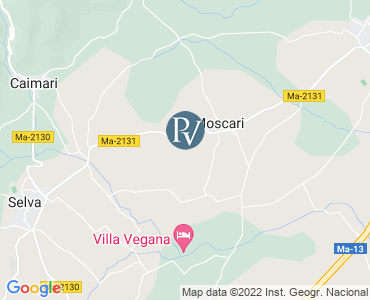 Alcudia is a perfectly restored walled city on the site of a Roman settlement with remains of ancient houses and a theatre. The maze of narrow streets enclosed by medieval battlements has been carefully restored as part of Mallorca's new tourist image.

Located about 5 minutes by car from the coast, Alcúdia should not be confused with the beach resort of Port D'Alcudia. While the port and coastal areas were only developed in more recent times as tourism became a major source of income for the island.

Alcudia is close to the coast, the beaches of northern Mallorca just a few miles away from Alcudia. The Northern part of the coastline is more popular with tourists and the place to experience hustle and bustle during peak seasons, with the vibe becomine quieter the further South you go. A variety of watersports are available, from pedaloes through to sailing, windsurfing and parasailing.

The island of Mallorca is blessed with wonderfully diverse landscapes, from white sandy beaches with tropical overtones, through green & fertile plains and mountainous villages, to the elegant & historic city of Palma de Mallorca. Our collection of private villas in Mallorca range from traditional stone fincas to contemporary designer villas. All of our villas in Mallorca have private pools and are conveniently located for exploring the pretty towns and beaches of this beautiful island.

The sea is the main attraction with a superb choice of beaches, from tiny coves to long sweeping bays and crystal-like blue water with gently breaking waves, ideal for snorkelling, sea kayaking or simply splashing about in. Pollenca and Cala d'Or are the perfect locations for those who wish to be within close distance of the beaches and the restaurants, bars of these beach resorts and our choice of holiday accommodation is equally varied and there are quality options for a wide range of budgets.