Villa Carmela is a 6 bedroom Premier Villa close to Siena, Tuscany, Italy. This beautiful property is on a charming, medieval country estate of 1050 hectares located in the middle of the Crete Senesi, a wonderful area South of Siena, characterized by its hilly yellow/red terrain which is typical of this area. The countryside is enriched by woods, cultivated fields and deep gorges that make the scenery unique. The country estate is composed of several buildings of historical and artistic importance; among them, the most beautiful, is the main house with its typical Tuscan architecture. There are also 9 apartments available for the guests and they are situated close by in two other buildings. All the apartments have been carefully renovated with exposed-beams ceilings and terra cotta floors; they are furnished with antique furniture which makes them especially charming. The villa is on two floors. The villa is furnished with antiques and is surrounded by a beautiful private park. At the guests disposal a private swimming pool (6x12m - 1.10/1.90m deep). The guests of the villa can also use the tennis court shared with other guests and all the facilities. The Villa faces a little private chapel built in the 17th century, which is still used for mass on Sundays.

** Please note that rates are a guide line only and may differ for this property. Please enquire with a member of reservations team for confirmation. **

DAMAGE DEPOSIT TO BE PAID ON ARRIVAL €600

LOCAL TAX - all tourists are required to pay €0.50 per person per night (except children under 12), for the first 3 days.  The payment is compulsory and must be in cash directly to the owner on arrival.

All prices are per night for the apartment only and it is booked between 3.30pm and 7:00pm pm on your arrival day to 10:00am on your departure day. Please note that availability shown is subject to confirmation - please call our reservations team. 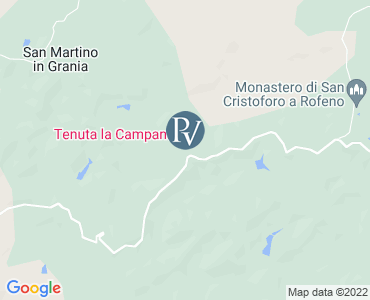