Orizortas is part of a three villa collection, situated on the coastline of the renowned Greek peninsula of Sithonia, in Halkidiki. The villa can be rented as a standalone property or as a collection with Ormiskus and Nero.

Although all villas have many similarities in their design, each also boast thier own personality and character.

On one side, the breath-taking view of the lush dense Mount Athos of Sithonia with pine and olive trees will impress you. On the other side, the view on the turquoise waters of the Aegean Sea and the exclusively private beach provide the background of the perfect setting for your stay.

Inside the  three villas, fall all areas are finished with a distinctive style with a selection of decorative touches providing all the modern comforts.

Each residence has a private garden with direct access from the ground floor, spread out in front of the houses reaching very close to the rocky beach. A few steps from the terraces the private infinity pool can be accessed and are beautifully surrounded by greenery and overlook the fantastic views.

The three villas are seperated by beautiful, flowering greenery, offering privacy to guests.

Orizortas is a south oriented 3-level villa of 145m 2 . This spacious villa offers 4 bedrooms and 4 bathrooms in total and can accommodate up to 8 people. It also features a private infinity pool of 70 cubic meters volume.

The semi-basement area is kept cool during the summer months and is adequately lit by natural light through two large glazed windows that open into a small personal garden.

The ground floor is a single room and comprises a fully equipped kitchen, a dining area and a seating area with a TV. Extra relaxation and dining areas are available on the terraces, under a covered pergola that surrounds the house.

The first floor consists of a separate, spacious suite and a four leaf glazing grows along the entire length of the balcony.

Villas are booked from 4pm on your arrival day to 10am on your departure day. Please note that availability shown is subject to confirmation - please call our reservations team. 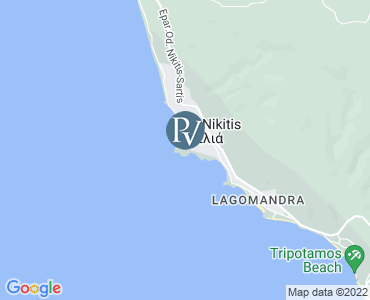 Halkidiki (or Chalkidiki) is the most popular holiday destination in northern Greece. Halkidiki has long been famed for its cosmopolitan seaside resorts, beautiful natural landscape, and exotic beaches. Halkidiki is a peninsula, which is divided into three smaller peninsulas, the so-called legs.

The first leg is named Kassandra and is full of popular tourist resorts, luxurious Halkidiki hotels, and organized beaches. The second leg is named Sithonia and is less organized and full of secluded coves. The third leg is named Athos and is a close monastic community, where the entrance is allowed only to men with special permission.

If you are in a mood of a little tour or excursion, your best bet is to hop on a boat from Ouranoupolis and tour around Mount Athos, a picturesque region with amazing beaches and impressive Byzantine monasteries.

Halkidiki peninsula is divided into three smaller peninsulas, Kassandra, Sithonia, and Athos. The first is the busiest one, the second is more secluded and popular for camping, while the third hosts a close monastic community that can only be accessed by men with special permission.

If you manage to peel yourself away from the stunning Halkidiki beaches, you should go sightseeing! A drive around Chalkidiki will get you to impressive sites such as the Cave of Petralona, Byzantine towers, ancient monuments, and beautiful monasteries.

If you’re feeling up to it, you should do a boat tour from Ouranoupolis to Mount Athos. Since the entrance to the Athos peninsula is not allowed, the boat sails along the coastline, giving passengers the chance to marvel at the beautiful monasteries from the sea.

Greece is a popular destination not only because of its amazing islands but also because the mainland offers plenty of options for a fabulous Mediterranean holiday. There is lots to explore from unspoilt fishing villages full of tranquil charm, tower towns to traditional stone built villages. Visit archaeological sites, learn more about the country's fascinating culture, travel along the spectacular coastline and enjoy its picture-perfect scenery.

Mainland Greece is the southernmost part of the Balkan peninsula. At its North, there are the regions of Thrace and Macedonia. There you will also find the smaller peninsula of Chalkidiki, which looks like a three-fingered hand jutting forth into the Aegean.

Going further south, you will come upon the regions of Epirus and Thessaly, and right below them the region of Central Greece. It’s in Central Greece where Attica and the capital city of Athens are located.

Even further south is the Isthmus of Corinth, the narrow strip of land to which the second, far bigger, peninsula of the Peloponnese is naturally attached. The Corinth Canal connects the Saronic and Corinthian Gulfs formed on either side of the Isthmus.

Each of these regions has each own unique character and look, not only when it comes to nature and the sites of outstanding natural beauty but also in architectural style, customs and folklore, local heritage and culture, local differentiation in terms of cuisine and delicacies, and even daily rhythms and routines.