Villa Celine is a 3 bedroom villa for up to 6 guests and is a true oasis of tranquillity. The property is surrounded by what feels like your own private forest creating a sense of escapism. With a private heated swimming pool, wonderful dining terrace, and the most modern of designs and furnishings to meet the highest standards of comfort Villa Celine is perfect for a Corsican escape.

With the sliding picture windows, the exterior and interior feel almost entwined, making this a great villa for indoor-outdoor living. The decked terrace by the heated saltwater pool is perfect for long evenings with family and friends, perhaps with a glass of something special. Just a step inside from the terrace is the open-plan living and dining area perfect for large groups. The double bedroom on the first floor enjoys access to a charming decked terrace with lovely views of the surrounding woodland.

Although the forest like surroundings give you a great sense of privacy, you are by no means away from the action. The village of Sainte-Lucie de Porto-Vecchio is just a five minute walk away and has some small restaurants and delicatessens, as well as a supermarket. Rentals at this villa come with a car (air-conditioned), allowing you to explore the stunning island of Corsica. Pinarello beach for example, one of Corsica's most iconic, is just a five minute drive away. 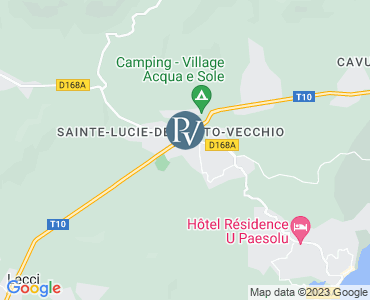 Porto Vecchio is an attractive old town perched high on dramatic hilltop with views across a natural harbour and deep bay. Beyond the city lies some of Corsica's most spectacular countryside.

Measuring around 5km from north to south and nearly 6km from west to its eastern mouth, Porto Vecchio’s natural, lagoon-like harbour was an attractive proposition for the diverse succession of rulers who came to Corsica. Today, it hosts a vibrant marina, a bustling port with Roman origins and a series of beaches, all overlooked by a picturesque old town and a 16th-century fortification.

The old town centre of Porto Vecchio is one of Corsica's most popular, thanks to its characterful maze of streets, its piazzas, its restaurants, bars and boutiques, its street market, its charming atmosphere and its views. For students of history and architecture, there are some interesting sites to visit, including the Bastion de France (in reality there are five bastions but three are private and one is in ruins), Place de la République (once the Roman heart of town), Porte Genoise (the town’s original gate) and the 16th-century citadel.

Porto Vecchio’s popularity is also due to the beauty and interest of its surroundings. which feature some of Corsica’s most idyllic beaches (Palombaggia, Santa Giulia, Cala Rossa and Pinarello), the forested hills of Ospedale just inland, and the archipelago of Cerbicale, four islets whose unspoilt transparent waters and wooded interiors form part of a nature reserve.

Any trip to southeast Corsica should include a visit or two to Porto Vecchio. There are few better spots in which to while away a few hours strolling, dining or sipping on a chilled drink while watching the world go by.

Corsica is the fourth largest island in the Mediterranean. It lies 105 miles (170 km) from southern France and 56 miles (90 km) from northwestern Italy, and it is separated from Sardinia by the 7-mile (11-km) Strait of Bonifacio. Ajaccio is the capital.

Corscia is known for its sublime landscapes, from red cliffs plunging into turquoise waters, to stone villages clinging to mountains and dramatic gorges planted with chestnut trees. There are hidden coves, sandy beaches and craggy peninsulas, you can roam over 1,000 kilometres of coastline, which includes the iconic Scandola Reserve and history, best discovered on walks through its cities nestled away from their citadels, overlooking the Mediterranean.

The departments in Corsica are Haute-Corse (to the north) and Corse-du-Sud (to the south).

Given its size the island combines an extraordinary amount of highlights. Apart from the coast and beaches for which the island is best known (there are 1,000 kilometres of coastline and more than 200 beaches) there are ancient hill villages and bustling port towns, and some of the most stunning coastal and mountain scenery to be found in Europe.

Corsica has very good weather for most of the year with spring and autumn being especially lovely times to visit.

You will also find numerous historic monuments, some dating from prehistoric times with numerous megalithic sites, dolmens and menhirs eg at Filitosa, still reminding us of the long history of the island. There are more monuments from the ancient Greek and Roman periods, and many fortified towers and citadels built when the Genoese controlled the island.