This brand new 3 bedroom Premier Villa is nestled in the outskirts of Ibiza Town with beautiful views of the picturesque Old Town - Dalt Vila and the sparkling Mediterranean. It is a modern and minimalistic styled property boasting the latest quirky technology.

The shaded outdoor dining area is the favourite spot for Al Fresco dining any time of the day, where the wonderful views can be fully appreciated. Its roof terrace boasts a 360 degree view of the sea and landscape surrounding the villa.

Inside, the lounge features a Smart TV and a large comfortable sofa.

All living spaces - including the kitchen and indoor dining area benefit from air conditioning, ensuring a cool atmosphere during the hot summer months.

The modern kitchen is fully equipped with all the appliances you would expect, such as - a coffee machine, large oven and double fridge freezer.

All our Ibiza properties require a security deposit, payable 21 days prior to your departure, which will be refunded within 2 weeks of your return once the final checks have been completed. Please see 'Extra Details' for further information.

The security deposit required for Casa Cleo is €2,000

All our Ibiza properties require a security deposit, payable 21 days prior to your departure, which will be refunded within 2 weeks of your return once the final checks have been completed. Please ask a member of the Premier Villas team to let you know the damage deposit amount required for your stay.

On arrival you will be able to check over the property with an agent to verify the content and conditions. Any accidental damage should be reported as soon as it occurs.

Deposits will be returned within 2 weeks of your return providing that the property is left in the same condition as when you arrived. In the event of damage, the deposit will be held until all issues are resolved. 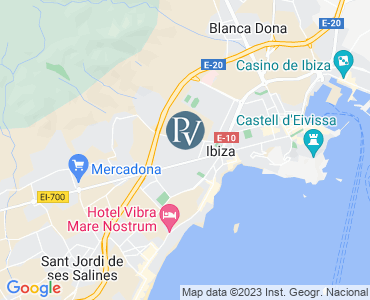 Ibiza Town is the capital of Ibiza and should be a definite, at least, day trip for any visitor to the White Isle. With a history dating back some 2500 years the town of Eivissa thought to be one of the oldest towns in Europe. The official name of the island is in Catalan "Eivissa" but its name in Spanish, Ibiza, is probably better known to most of us. The Dalt Vila, or Old Town, is now a recognised UNESCO World Heritage Site. The Upper Town is the oldest area, which emerges above the port facing the sea. The architecture and layout have not been changed since the fortifications were built in the 16th century, and the defensive walls and bastions have incorporated those which existed before. The town now offers a fantastic walk through history with narrow cobbled streets lined with gift shops and art galleries as you walk up to the cathedral.

Across from the Old Town, on the other side of the harbour, lies the trendy and hip Marina Botafoch. This area has developed hugely in the past few years with colourful buildings and a big sweeping walkway with a mix of tourists and locals strolling by. Stylish boutiques from international fashion designers give this area a unique feel as do the mega yachts of the super-rich moored here. All this makes it a great area to do a bit of celebrity spotting

In Marina Botafoch there are high-end restaurants like the glamorous and luxury STK Ibiza which combines fine dining, design and entertainment for a very special experience. Inside the town walls of Dalt Vila, in the small cobbled streets, you'll find a great strip of restaurants including the beautiful La Dispensa, which serves Italian cuisine with touches of the Mediterranean. Outside the city walls, in the area around Vara de Rey is a great selection of good value restaurants and for a delicious twist try fine dining restaurant La Imprenta, where in summer you can catch its nightly Cabaret show. La Cava nearby serves tasty tapas with a modern take.

The Rock Bar is possibly the most famous of the many pre-club bars on the harbour prom that line the old fishing quarter. Since the early clubbing days of the island, this area has been a traditional warm-up spot before hitting one of the super clubs. With a buzzing, cosmopolitan vibe - you owe it to yourself to go and experience it. Regular tourists mingle with the melee amidst music, laughter and one of the coolest cosmopolitan vibes to be had in Europe on one long narrow street. When the bars close their doors, the Ibiza night is just getting started: this is when people start to head to super-clubs like Pacha close by or those further afield.

A shopper's paradise awaits you in Ibiza Town. Around the old port area you'll find more boutiques and souvenir shops, which in the summer months are open till 22:00 or even midnight, with many staying open through the winter now too. Summer hosts a daily hippy market in the narrow streets around the port harbour from late afternoon till midnight as well. The market is perfect for browsing and picking up gifts with finely carved silver jewellery.

Thanks to its rich history, Ibiza Town is a great place for culture. The Archaeological Museum is a place to walk into Ibiza's past with many historical treasures from the various necropolis sites across the island. The Baluard de Sant Jaume in the western part of the city wall of Dalt Vila, also known as the “Bulwark of Jakobus”, contains original Sixteenth and Eighteenth Century military technology with replica weapons and armoury; you can even try on the armour to see how heavy it is. The brilliantly curated Contemporary Art Museum features local and international talent and the historic Puget Museum displays photographs and paintings from Ibiza's past.

Beaches are a mere 15-minute walk away in the suburb of Figueretas, plus a short ferry ride away is the pretty bay of Talamanca with its long stretch of sand. And it is only a short taxi or bus ride to Playa d'en Bossa for its clubs like Ushuaia and Hi Ibiza and the many cool beach clubs and bars that line its famous beach, the longest on the island.

Premier Villas offers a large range of luxury villas in Ibiza. Whether you are looking for a beautiful private villa up in the North, or a luxury villa by the sea in the south, we can help. The island of Ibiza is only 24 km long by 17 km wide so you are never more than half an hour’s drive from magnificent beaches and great restaurants

Ibiza boasts striking scenery, charming family resorts and many of the best beaches in the Balearics. Ibiza is situated in the western Mediterranean Sea and is divided into five provinces: Eivissa the capital; Santa Eulària, San Antoni, San Josep and San Joan.

Well known for it’s night life, Ibiza is also a wonderful island to explore, with nearly 60 beaches to choose from on Ibiza, and more than 300 days of sunshine per year. Ibiza’s landscape lends itself perfectly to an enormous choice of outdoor leisure activities such as golf, horse riding, snorkelling, diving and boat trips.

The cuisine is quite different from what you’d find on the Spanish mainland. Juicy, charred meats grilled outdoors and fresh fish make up the majority of meals, alongside locally grown organic fruit and vegetables and fresh pastries.