A panoramic terrace on Mount Etna is the main feature of Trecastagni, a quiet village with an amazing view not only of 'the giant of fire' but also of the southernmost part Sicily and Calabria (the 'toe of the boot' of Italy on the other side of the Strait of Sicily). It's located only 15K away from the lively Catania and is set in the hilly countryside of the Etna Park and its naturalistic attractions, such as the volcanic small cones of the mount 'Ilice', 'Gorna' and 'San Nicolo'. These have been formed in different geological periods and are the favourite attractions for those who love trekking.

This luxury villa with swimming pool is located in this small village on the slopes of Mount Etna. Its privileged position is ideal for exploring the surrounding area rich with historical attractions and culinary delights and for discovering and experiencing authentic local traditions and flavours of this unique volcanic land. It is an ideal starting point for exploring the Etna Park and the Wine Road, but also the charming, beautiful Greek and baroque towns of the South Eastern Sicily, such as Taormina, Catania, Syracuse and Ragusa.

This beautiful villa with its refined, elegant rooms has been renovated with in mind creating perfect comfort choosing the very best materials, fittings and furniture, such as parquet flooring and rich fabrics.

The villa is on two levels. On the ground floor is the warm, cosy living area with living room, dining room and a fully equipped kitchen. From the dining room, a staircase leads to the lower ground floor with three wonderful bedrooms with en suite bathrooms, a walk through room with a sofa bed and a bright living room. Its external covered patio, wide garden with lawn and beautiful swimming pool makes it the perfect setting to relax.

SECURITY DEPOSIT - 500 euro to be paid locally in cash upon arrival.

Security Deposit is 500 euro to be paid locally in cash upon arrival, unless different arrangements have been made at time of booking. The Security Deposit will be returned upon departure, minus any breakages. 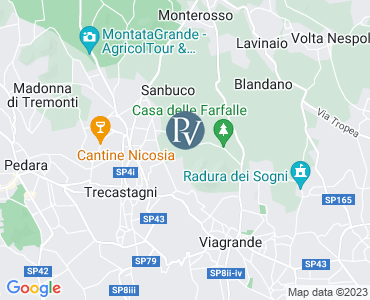 Acireale, Caltagirone, Catania, Grammichele, Licodia Eubea, Militello, Mineo, Misterbianco, Nicolosi, Palagonia, Pedara, Trecastagni, Scordia, Vizzini. In a single day in 1693, all these places were devastated by a disastrous earthquake, soon after to be rebuilt to a greater or lesser extent in the Baroque style of the newly flourishing Noto Valley.

Catania The city conserves the layout given to it in the 18th-century by the viceroy who supervised its reconstruction. The Uzeda Gate near the harbour was erected in honour of this viceroy in 1696. The gate links the Chierici Seminary to the Cathedral, the facade of which was built between 1730 and 1758 by Giovan Battista Vaccarini, who also designed the Elephant Fountain (1735-6) that stands in the square before it, reminiscent of the fountain in Piazza della Minerva in Rome.

Several other buildings were commissioned from Vaccarini, including the Palazzo di Città, the Valle, Reburdone and San Giuliano palaces, the Benedictine Monastery and the Sant'Agata Abbey.

Catania lies at the feet of the highest volcano in Europe: Mount Etna. Etna, land of myths and legends. The people in ancient times looked at the mount with fear and respect. They considered it as the abode of Volcano, God of fire and of the Cyclopes.

For centuries it has been the great Mediterranean bonfire and a lighthouse to sailors, its short name exists from the dawn of civilization. Its meaning dates from time immemorial.

The Arabs were so amazed when they first saw it that they defined it 'othe' mount of 'mountso' ('Mongibello'). The highest of all Europe active volcanoes (approx 3,350 metres, its height changes following each eruption); it overlooks the whole Ionic coast and can be seen from a distance of over 250K together with its 1,260sqk of lava surface and a base perimeter of 250K, nowadays Etna is an international resort for tourists and sportsmen, bringing old memories to the fore with the use of modern day equipment.