Villa Simiane is a charming property with stunning views over the ruined castle of Grimaud and the Gulf of St Tropez. The villa is presented to a very high level with modern decor, is fully air conditioned and benefits from a close position to St Tropez and surrounding villages.

On the outskirts of the village of Grimaud, Villa Simiane is near a small selection of shops, restaurants and bars as well as tennis courts. Grimaud is just one of many inland villages ready to explore, or why not try Cogolin, Gassin or further along the coast? Golfers will find themselves comfortable at the nearby course at Beauvallon, whilst other activities include horse riding, hill walking, go-karting and polo. There are various festivals in the summer to enjoy.

With easy access to all villages within the area, including St Tropez itself, Villa Simiane benefits from the chic cafes, sophisticated nightli fe and of course Pampelonne beach and its numerous beach restaurants, including the famous Club 55, all within an easy 20-minute drive of the villa. 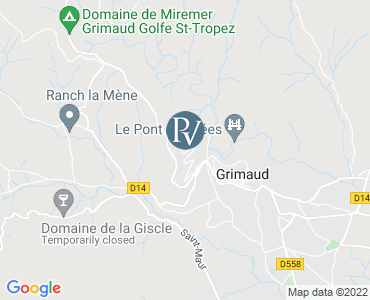 Nestling between the Gulf of Saint-Tropez and the Maures Massif, Grimaud is a charming village whose medieval character is still very much in evidence. Perched on a hill, the first thing you see when you arrive is its castle. Built in the 11th century, this feudal structure (of which some imposing ruins remain) offers a stunning view of the coast and the wooded hills of the Maures Massif.

Boasting some well-preserved heritage, Grimaud contains a plethora of pretty little cobbled streets in bloom, village squares, archways and restored period homes. In the old village, you can also see the beautiful Church of St. Michael, built in the late 12th century in the Provençal Romanesque style. It houses a fresco from 1850 depicting St. Michael, St. Peter and St. Bartholomew, as well as contemporary stained-glass windows made in 1975 by the jeweller Jacques Gautier.

Near the village, starting from the Saint-Roch mill, the path to the Fairy Bridge (Pont des Fées) will delight lovers of country walks, with its peaceful setting and stunning view of the castle!

The smell of lavender wafting in a summer breeze, the gentle swaying of hillside olive groves, empty sun-swept corridors between picturesque stone buildings—Provence is a region full of sensory romance, rewarding travellers with its breath-taking vistas, mouth-watering cuisine, and small-town tranquillity. The Romans once dominated this area, and many of the towns serve as visual historical accounts of France’s southwestern region, with remnants of Roman, Byzantine, medieval, and Renaissance structures incorporated into the modern construction of the upscale (but still quaint) towns. When you’ve had your fill of idyllic lanes in famous Aix-en-Provence and enjoyed St. Tropez’s legendary beaches, head for some of our smaller, lesser-known towns.