Villa Francoise is where genuine rest and relaxation awaits.
The villa itself is bright and light and enjoys full air conditioning, sleeping twelve people in comfort. Spend long lazy days in the pool with the sounds of the waterfall to relax to, or perhaps chill out in the jacuzzi. Enjoy games with the children on the large flat lawn (table tennis and badminton available) before soaking up the sun on one of the loungers. There is a summer kitchen with barbecue so you can grill your favourite treats, or why not take advantage of nearby Val de Mougins.

Within approximately 20 minutes walk, find shops, restaurants and tennis, leave the car behind and stroll to town for a great night out. Other places to visit include Mougins, Cannes and beach, Valbonne and Grasse - all a short car journey away. Golf is possible within a few miles at Royal Mougins. 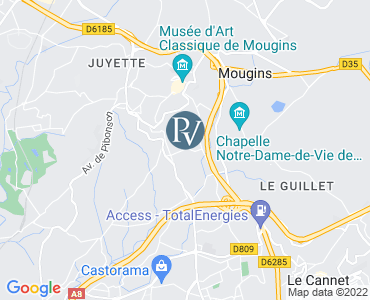 Once a small fishing village, Cannes is now a glamorous seaside town considered to be one of the social hubs of Europe.

The town is renowned around the world for its incredible beaches, luxurious hotels, chic boutiques, and designer shops. It’s the ultimate destination for anyone looking to really embrace the high life.

The home of Cannes Film Festival, this destination exudes a sense of glamour and sophistication that is difficult to find anywhere else in the world. Cannes also promises hot summers and mild winters, making it a great place to visit at any time of the year.

The attractiveness of the Provence Alpes Côte d’Azur region makes it one of the world’s leading tourist destinations but also the second largest European region for tourism capacity.

The region covers a large area from the Mediterranean Sea up to the French Alps. Its identity as a geographical region is a hold over from the days of the Roman Empire. Its western border is the Rhône River and its eastern border is Italy. The Provence includes the French Riviera and is famous for its sunny weather, colorful countryside, tradition, wine, food, and language (Provencal).

Its main attractions include the city of Avignon and the wide variety of villages which can be easily explored by car or bicycle on the network country roads and highways. Van Gogh spent a respectable amount of time in Arles painting the countryside.