Sable offers understated elegance and a contemporary finish. The 5 bedroom villa boasts a private pool making it an ideal choice  for a relaxing beach holiday in the enchanting setting of the Ile-de-Re, off France's west coast.

A short stroll through idyllic woodland and sand dunes takes guests directly on the long, fine sandy beach of Plage des Prises. The villa is also well positioned to reach some of the island most iconic villages, such as St Martin-de-Re and Ars-en-Re, and the summer food markets in the pretty village of La Couarde are a mere 5-minute bike ride from this attractive 5-bedroom villa. 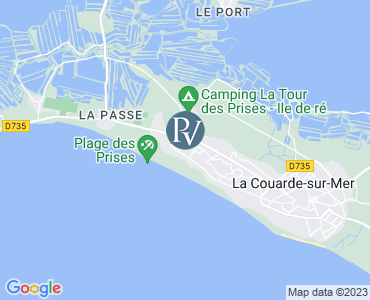 Ile de Ré is an island, reached by a long modern bridge, north of La Rochelle in the Charente-Maritime department. The island is a very popular holiday destination on this sunny coast of western France.

Dotted with tranquil villages and their quaint streets filled with pastel-shuttered homes, Ile de Ré sits in a rural landscape of big skies, salt marshes surrounded by dunes and sandy beaches, vineyards and pine forests deep with ferns. Ile de Ré translates as the island of ferns. Once occupied by the Romans, the name is believed to come from the Latin word ratis meaning ferns.

There are 10 villages on the island to visit, each with a different character: Rivedoux-Plage, La Flotte, Sainte-Marie-de-Ré, Le Bois-Plage-en-Ré, La Couarde-sur-Mer, Ars-en-Ré, Saint-Clément-des-Baleines, Les Portes-en-Ré, Loix, and the main town of Saint-Martin-de-Ré.

This picturesque spot encourages you to take a step away from the modern-day. Promoting the use of bikes, the island has created a 110-km network of cycle paths that crisscross this tiny (almost flat) landmass through open countryside and linking beaches to small towns. From one end to the other, the island is 30km (19 miles) long and 5km (3 miles) wide. From Sablanceaux to Les Portes-en-Ré, the cycle route is 31.5km and takes an average cyclist a little more than 2 hours to ride.

All facilities are available on the island including supermarkets and petrol stations and many holidaymakers never feel the need to leave the island at all during a visit.

Nouvelle-Aquitaine is a region of southwestern France created in 2016 by the union of the former regions of Aquitaine, Poitou-Charente and Limousin.

It is a very diverse region. In the far south, near the Spanish border, the area is known as the Basque region with a distinct culture and cuisine and a number of bustling seaside resorts. Further inland, the departments of Dordogne and Lot-et-Garonne are typical of south-west France with scenic countryside, meandering rivers and beautiful bastide villages. The countryside varies from vineyards around Bordeaux and Cognac, sunflower fields in Charente, rolling greenery in Limousin and the green marshlands of the Marais Potevin in Deux-Sèvres. All along the coast there are popular seaside resorts and quieter natural beaches.

This region is very popular with holidaymakers and expats who are drawn to the sunny climate, pretty towns and villages, rolling countryside and vineyards and Atlantic beaches.