The Villa Gabriella is located in the peaceful western part of Hvar town, where you can experience and privacy without being too far removed from the hustle and bustle of town life. Hvar is one of the most popular destinations in Croatia, due to the famously sunny weather, historical tourist destinations, and beautiful beaches. The island of Hvar allows you the perfect base to explore other Croatian destinations, with ferries regularly available to take you to Brac or Makarska. Croatia is known for the beautiful nature and historical sites that you should be sure to take advantage of during your holiday.

This traditional stone villa can comfortably accommodate up to 8 people, with 2 double bedrooms and 2 twin bedrooms on the second floor of the villa. The bedrooms are comfortably furnished with ample storage space as well as desk space should you so need it. One double bedroom opens up to the terrace area that overlooks the pool and surrounding nature. There are also 3 bathrooms within the villa, with both bath and shower options and a washing machine.

On the bottom floor of the villa, there is an open plan living room, dining room, and kitchen space. There is ample room to relax and in the living room, there are a television and French doors that lead out onto the pool area. The dining area also opens up onto the pool area, where you can enjoy your dining experiences and the breath-taking Croatian sunset. The modern kitchen provides everything you should need during your stay at Villa Gabriella.

The outdoor pool area is surrounded by well-kept bushes to allow you the utmost privacy. There is an abundance of space to relax and enjoy the Mediterranean sunshine whilst outdoors, as well as further outdoor dining space if you should choose to dine al fresco.

Villas are booked from 16:00 on your arrival day to 10:00 on your departure day. Please note that availability shown is subject to confirmation - please call our reservations team. 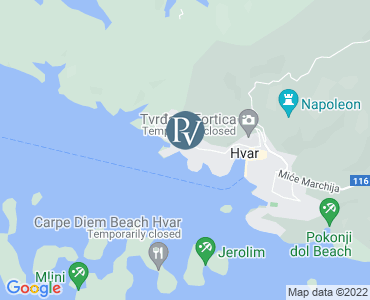 Hvar is a Croatian island in the Adriatic Sea, located off the Dalmatian coast, lying between the islands of Brac, Vis and Korcula. Approximately 68 km long, with a high east-west ridge of Mesozoic limestone and dolomite, the island of Hvar is unusual in the area for having a large fertile coastal plain, and freshwater springs. Its hillsides are covered in pine forests, with vineyards, olive groves, fruit orchards and lavender fields in the agricultural areas. The climate is characterized by mild winters, and warm summers with many hours of sunshine.

Hvar Island is often known as the pearl of the Adriatic and the sunniest, with an annual average of 2724 hours of tireless sunshine year-round, making Hvar Villas the perfect place for your holiday regardless of the time of year. Hvar is also known for the friendly locals and beautifully rich plant life that covers most of the island. Most famously, the internal parts of the island contain numerous lavender fields. The old town is a short distance away from a strange phenomenon called the Blue Cave, where the water appears to glow as if by magic. Boat excursions serve the nearby Pakleni Islands, which have secluded beaches and coves.